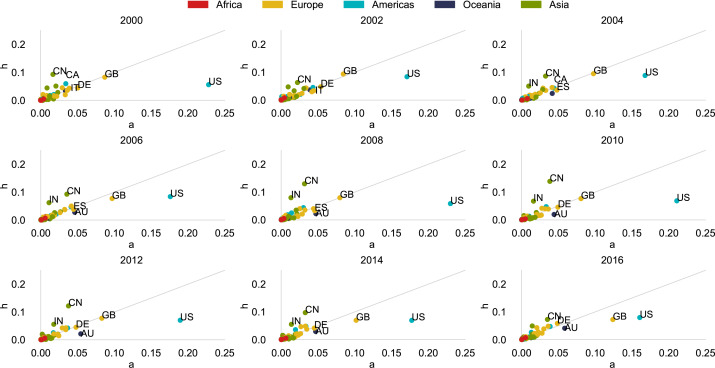 “Measuring scientific brain drain with hubs and authorities: A dual perspective” is out!

We studied international migrations of researchers, scientists, and academics, to better understand the so-called “brain drain” phenomenon, if and how it can be measured, and how it changes over time. We discuss why some trivial measures can be ineffective, and as a consequence, we built the global scientific migration network to identify the most important countries involved in the mobility of scholars, and to study their role at a local and a global scale.

For such a purpose, we analysed a temporal directed weighted network representing scientists moving from one country to another, from 2000 to 2016, built on top of 2.8 million ORCID public profiles. With the support of the well-known HITS algorithm, we found hubs and authorities to study the interplay between providing and attracting researchers from a global perspective, and its relationship to other structural features.

Our findings highlight the presence of a set of countries acting both as hubs and authorities, occupying a privileged position in the Scientific Migration Network, that is network of the scientific migrations, and having similar local characteristics, i.e., several neighbours with highly differentiated flows of researchers moving from/to them. However, it is striking that some of these countries have a predominant role over the others, and that we can easily observe countries that are extremely more attractive than others, as well as other countries that perform better as exporters than importers of scientists. It is also interesting that hubs and authorities scores can change over time, alongside with their relative discrepancy, and other network measures, suggesting that local and/or global policies can buck the trend.